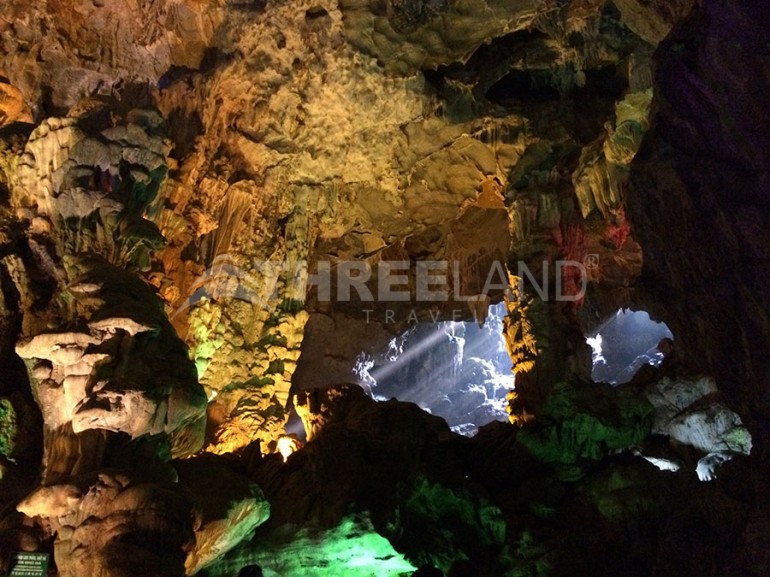 Thien Cung Cave (Heavenly Palace Cave) is located in the southwest section of Halong Bay, 4 km away from Dau Go Island, and is considered the most beautiful primitive cave of the Bay. The cave is 10,000 square meters with a complicated interior structure of many floors, and high ceiling. The cave became famous thanks to a unique system of stalactites and stalagmites, that take different forms and shapes.
Exploring Thien Cung Cave’s craggy cliffs is no easy task. Going through a narrow entrance, you would discover a large space inside the cave, and the further you walk, the more beautiful formation of stalactites come into sight.
On the wall of the eastern side of the cave, an impressive picture of stalactites and stalagmites give tourists the most fantastic feeling ever. A travel guide would never forget to tell you the legends or folk tales interpreted from the picture by the local Halong people.
Make full use of your imagination to create pictures of fish schools, flocks of birds, and the daily life of people from a giant natural rock pillar, all naturally sculptured by stalactites, when you come to the center of the cave.
Above your head, on the ceiling of Thien Cung Cave, amazing rows of stalagmites drooping through million years that create colorful pictures and melodies thank to the light and the wind flowing inside the cave.
Leaving the cave, tourist would feel a lingering sensation, like they have just finish a tour to a massive art museum created by the Mother Nature