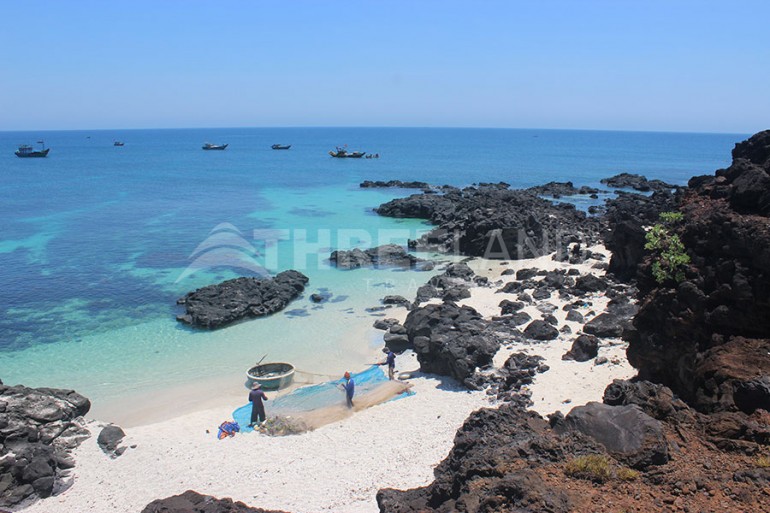 With many historical, cultural relics and fascinating tourist attractions, the 10-square-kilometer Ly Son Island in Quang Ngai Province of Vietnam is one of the country’s most amazing corners to explore. Though referred by many as the “fairy island”, it is also known for its vast garlic fields with a pungent aroma, thus, is called as the kingdom of garlic. But that’s not all this island can offer. It cradles a very diverse ecosystem with five mountains, including Thoi Loi, Gieng Tien, Hon Vung, Hon Soi and Hoi Tai, which lures tourists with its mysterious caves, imposing waterfalls, and splendid rivers and lakes. And if you look beyond the mountains are lines of stunning beaches laid with colorful rocks, pebbles and corals.Among the most noticeable attractions nestled in the island are Hang and Duc Pagodas and An Hai Temple. The Hang Pagoda is a peaceful sanctuary with ancient architecture surrounded by beautiful scenery. It is founded about 400 years ago using a natural cave, is a combination of natural feature and human labor, thus of great value in different ways. It is a popular destination for tourists seeking for relaxation in a magnificent and poetic scenery. The An Hai Village Temple in Dong Hamlet, An Hai Commune, Ly Son Island District was built in the first year of King Minh Mang (1820) in an architectural style of Nguyen Dynasty which was reflected in uniquely carved altars or on the surface of rafters, supports and doors.Not only accommodating various valuable historical and cultural relics, the Ly Son Island also embraces legends associated with many folk and traditional festivals such as Tet (Vietnam’s new year), boat race, hat boi (traditional Vietnamese opera), fish worshipping, and especially ceremonies to pay homage to solders who died in battles in Hoang Sa (Paracel) and Truong Sa (Spratly) islands. But if you are not fascinated enough with its hundreds of cultural and historical relics and diversified architecture, the island has a 374-square-meters museum displaying more than 1,000 documents, photos and artifacts associated with the heroic Hoang Sa and Truong Sa troops. The island also holds a cemetery for the late Hoang Sa soldiers. With that, Ly Son is a living museum.Many artifacts of Sa Huynh and Cham Cultures were discovered on Ly Son island. The Thien Yana and old ruong houses are evidence for Sa Huynh and Cham’s ancient civilizations. Indeed, artworks and historical tokens can come in many forms. But perhaps Ly Son, with its charm, rich history and entirety, is among the few ones that prove to be a token in itself.